'The whites were stationed at a height, and first they got us out of hiding with their shots. . . . They stopped when the Interahamwe [the Hutu militia] came, and started again when we resisted.'

"I tell you as I saw it," says Fidéle Simugomwa, a former Hutu-extremist militia chief during the Rwandan genocide, as he sits for an interview with French documentary-maker Serge Farnel. "The French soldiers were standing on the hill, and firing down at the Tutsi. . . . We had a sign so the French didn't shoot at us—[we had] leaves on."

One by one, the ex-génocidaires whom Mr. Farnel films tell the same story: Namely, that on May 13, 1994, small teams of white men they describe as "French soldiers," clad in fatigues and riding in jeeps or trucks, gathered at lookout points in the backwoods of western Rwanda. They fired into the Bisesero hills, scaring the Tutsi out of hiding. They then aimed directly at the fleeing men, women, and children. When the shooting stopped, the Hutu killers moved into the hills. Wielding machetes, lances, nail-spiked clubs, and their own guns, they finished off the wounded. A score of survivors recounted the same version of events to me. 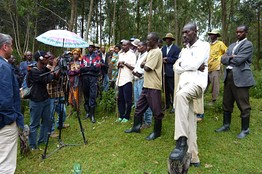 Rwandans line up to tell their story of events in 1994. 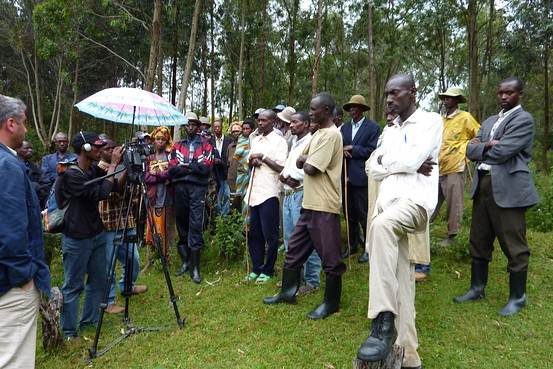 On that day and the next, some 40,000 Tutsi were slaughtered. All told, an estimated 800,000 Tutsi and anti-genocide Hutu perished in the ghastly spring of 1994.

Few events in recent history have more deeply scarred Western consciences than the Rwandan genocide. Samantha Power, now an adviser to President Obama, won a Pulitzer Prize in 2003 for her book "A Problem from Hell: America and the Age of Genocide," which painted a damning portrait of the Clinton administration's evasiveness and passivity as the genocide unfolded. President Clinton later visited the Rwandan capital of Kigali to offer an apology on behalf of the United States and the "world community."

In France, however, the official narrative of the genocide portrays French policy in a more flattering light. The Web site of the French Foreign Ministry notes that "In the 1990s, France invested in the efforts of the international community to try to curb the mounting tensions in [Rwanda]. . . . France was the first country to denounce the genocide and decided to carry out a humanitarian mission." That mission, known as Operation Turquoise, began in June 1994, and was ostensibly intended to create safe humanitarian zones.

Here some history is in order. Though Rwanda was a Belgian colony prior to its independence in 1962, the French have long seen it as part of Françafrique: French-speaking African countries over which Paris continues to exert a paternalistic, sometimes positive, and often opportunistic, influence.

In Rwanda, that influence took the form of a close relationship with the Hutu-supremacist dictatorship of Juvénal Habyarimana. During the Rwandan civil war of the early 1990s, French troops came to Habyarimana's aid in his war with the mostly Tutsi (and largely English speaking) opposition forces of the Rwandan Patriotic Front (RPF), coming from Uganda under the leadership of Paul Kagame, now Rwanda's president. Though it seems absurd in retrospect, at the time the government of then-French President François Mitterrand feared that a victory for the RPF would mean the loss not only of a trusted ally but the forfeiture of Rwanda to the "Anglophone" world.

The event that finally sparked the genocide came on April 6, 1994, when a plane carrying Habyarimana was shot down. Who killed him remains one of the great unsolved mysteries of contemporary history. One prominent French magistrate is convinced that the assassination was orchestrated by the RPF and has issued numerous arrest warrants for close associates of Mr. Kagame. The French in the past have also insisted that what transpired in Rwanda was a "double genocide," implying that the Tutsi were as much the victimizers as they were the victims in the run-up and high noon of Rwanda's agony.

This version of events, however, has its detractors. Mr. Kagame adamantly denies any involvement in the death of Habyarimana, who was closing in on a peace deal with the RPF when he was assassinated. The Rwandan government has also long alleged that France played an active role in supporting the Hutu extremists during the genocide, and it points to numerous prominent génocidaires who have lived openly and unmolested in France for years.

In 1998, French journalist Patrick de Saint-Exupéry, who had visited with French soldiers during Operation Turquoise, wrote a series of articles in Le Figaro describing how France's "humanitarian zones" mainly served to protect Hutu killers as they retreated in the face of the RPF's military advances. The articles created enough of a stir for the French parliament to form a committee of inquiry, which ultimately concluded that France bore no specific responsibility for the genocide and at worst had been the victim of honest misunderstandings.

Enter Serge Farnel, a tall, rather hulking Parisian of 44 with a background in aeronautical engineering. Mr. Farnel's curiosity about the genocide was piqued several years ago when he heard comparisons made between France's actions in Rwanda and the behavior of the Vichy regime during World War II. During a trip to Rwanda last April, he met a Tutsi survivor who insisted that French soldiers had been present in Rwanda in May 1994, when supposedly none were there. At first he assumed that her traumatized memory was playing tricks on her, but she clung to the account. So he began asking others, and he put their testimonies on film.

The result is 100 hours of footage, which consists mainly of separate and group interviews with both victims and perpetrators of the slaughter, as well as detailed re-enactments of the killing fields. It's difficult to overstate the rigor with which Mr. Farnel conducted the interviews: On tape, the interviewees sometimes become impatient when he calls them back for repeated questioning, like witnesses on the stand, seizing on any apparent discrepancies in their testimony. Not every survivor of the May 1994 massacres says he recalls the presence of French soldiers in Bisesero. But many say they do, and their stories are consistent. After watching the filmed testimonials, I decided to join Mr. Farnel in Rwanda to watch him at work and confirm these accounts for myself.

"The whites were stationed at a height, and first they got us out of hiding with their shots. . . . They stopped when the Interahamwe [the Hutu militia] came, and started again when we resisted," says Sylvestre Niyakayiro, a Tutsi who was 22 at the time and recalls being chased from hill to hill in three attacks that day with whites at the helm.

Mr. Farnel asks repeatedly if Mr. Niyakayiro isn't confusing his dates, if the white men he remembers from mid-May weren't actually the French soldiers who arrived at the end of June for Operation Turquoise, when another assault was launched against the few Tutsi who remained in the vicinity of Bisesero.

"The days of the 13th and 14th [of May] were days that are unforgettable," Mr. Niyakayiro replies.

But who exactly were these "whites"—assuming they really were there? "Your information is not credible as it rests on no historical reality," Gen. Jean-Claude Lafourcade, who commanded Operation Turquoise and now runs an association of soldiers who served in Rwanda, wrote in an emailed response to my questions, adding that "it seems you are being manipulated." Like the Elysée, the Association says "there were no French soldiers in Rwanda in the month of May 1994." L'Institut François Mitterrand, led by the late president's close adviser Hubert Védrine, declined to comment for this article.

One Frenchman who was in Rwanda at the time is Paul Barril—probably the most storied ex-member of France's GIGN, an ultra-elite special-ops unit. Mr. Barril was an adviser to Habyarimana at the time of the president's death, according to his 1996 memoir "Secret Wars at the Elysée," in which he writes of being one of the first to inspect the wreckage of the president's plane, and notes that "Following the attack, a cycle of massacres began that resulted in the establishment of the pro-American Tutsi dictatorship of Paul Kagame. More than one million people perished in Rwanda. Who cares?"

My attempts to contact Mr. Barril by phone and email for this article were to no avail. "He does not want to be found," his publisher told me.

One account of Mr. Barril's activities is contained in "Leave None to Tell the Story: Genocide in Rwanda," by the highly regarded Rwanda expert Alison Des Forges, an American who died in a plane crash last year. Des Forges writes that Mr. Barril was hired by the Rwandan defense ministry to train as many as 120 men in "marksmanship and infiltration tactics for an elite unit in preparation for attacks behind the RPF lines. The operation was code-named "Operation Insecticide," meaning an operation to exterminate the inyenzi or 'cockroaches.' . . . When asked about the training program in the course of an interview with a Human Rights Watch researcher, [Mr.] Barril denied knowledge of it and ended the conversation abruptly."

The Rwandans that Mr. Farnel and I interviewed insist the French military itself was involved in the massacres of mid-May. "I know they were French military because I had been with them in Mutara in 1991," says Semi Bazimaziki, who was a corporal in the Rwandan military during the genocide. "I knew very well their ways of operating." Another ex-génocidaire, Jean Ngarambe, reports that he was rejected as a guide for the visiting whites because "I didn't speak French." Instead, another man who did speak French was accepted.

One incident, described by the perpetrators and victims alike, is particularly telling. Several of the ex-génocidaires recall that on May 12, the day before the butchery began, they were summoned to a village. They say a local Hutu official, a man named Charles Sikubwabo who is now a fugitive being sought by the International Criminal Tribunal for Rwanda, presented "French soldiers" who had come to serve as reinforcements. Mr. Sikubwabo instructed the assembled Rwandan killers to proceed along a certain route without attacking or approaching any Tutsi along the way. They came together again a few miles away at a place called Mumubuga, where they found more than 50 Tutsi. Flanked by the white men, Mr. Sikubwabo told the Tutsi not to be afraid, that the whites were there to help them, and that they should go back to the hills to await aid.

"We understood that it was a trick for the Tutsi," says Raphaël Mageza, Mr. Sikubwabo's brother-in-law. The whites were acting as lures to gather information about where the Tutsi were hiding. Gudelieve Mukangamije, one of Mr. Mageza's would-be victims, agrees: "They [the whites] didn't give us tarps [as promised]. They killed us. And they betrayed us to the Interahamwe."

Yesterday, Nicolas Sarkozy became the first French president to set foot in Rwanda in a quarter century. "What happened here forces the international community, including France, to reflect on the mistakes that prevented it from anticipating and stopping this terrible crime," he said. Mr. Sarkozy has previously suggested that a committee of historians look into what happened during the genocide. The French President, adds Foreign Minister Bernard Kouchner, "is not opposed to having France look at its history."

If that is so, France and its historians could make no better beginning than to look at the extraordinary testimonies assembled in Mr. Farnel's massive documentary. Where its evidence leads, they have a moral and historical duty to follow. As Mr. Farnel says, "No country can run from its history."

Miss Jolis is an editorial page writer for the Wall Street Journal Europe.